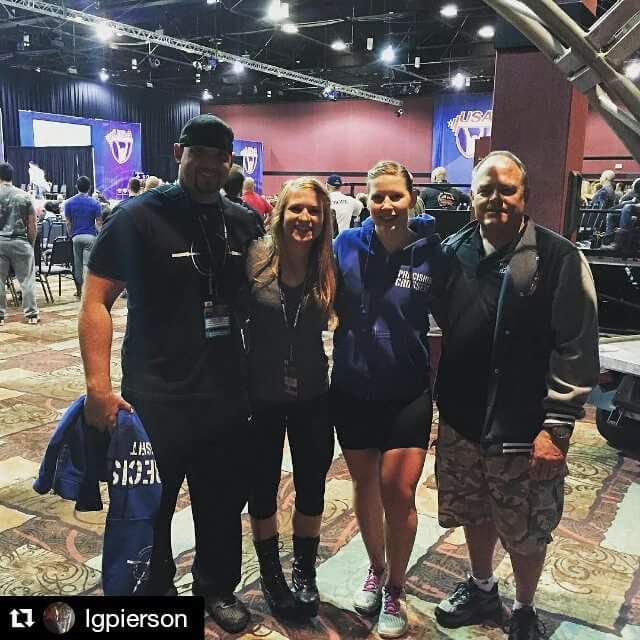 The 2015 American Open was filled with ups and downs. There were definite moments of triumph and ultimate moments of failure. But, in the end, one thing remained true… love.  As the coach of the amazing athletes that represented Precision Barbell: Chrissy Barron, Nathan Doud, and Crystal Riggs. I could not be more in love with these individual spirits. The support they all showed for each other was special, uncanny, and unique. They were not just there to compete themselves, but to help each other compete as well. Anything one or the other needed, they took care of together. Like a true team. Good or bad they showed unconditional love for one another.

As a coach, it’s easy for me to sit here and over-analyze the weekend. Why did Chrissy get called for an arm bend on her 77K Snatch PR? Why couldn’t Nathan stand up his 141K Clean? Why did Crystal almost pass out after her 109K clean? Some of these things I cannot answer, and some… I will. I must.  I could sit here and go mad over what if’s. However, I chose to move forward. I know Chrissy will fix that bend. I know Nathan will stand up that clean next time like he’s done countless times before. I will find out what’s up with Crystal. You better believe it! One thing rings true about this weekend. It was not a complete success. I’ve felt what it is like to be perfect at this level of coaching and what it is like to fail. We did not fail by any means this weekend, but we were not perfect. I could sugarcoat it all I want. Unlike many coaches though, I won’t point fingers or place blame. Instead I will go back to the drawing board. I will breakdown the things I can control, and in the end I will find out a way to make these athletes perfect. Although I hate to lose, I always learn from it. How does one expect to win if he doesn’t know how to lose? Failure is a part of sport. I’m ok with it. It just means that winning will taste all that much sweeter. Putting all this aside, one thing still stands: each one of these athletes is a nationally ranked weightlifter in the top 10% of their sport. They all put up competitive totals at the National level. Their performance is nothing to be ashamed of, but rather to be celebrated. They are truly among the best USA has to offer. Something to always be proud of.

In the words of Theodore Roosevelt: “It is not the critic who counts; not the man who points out how the strong man stumbles, or where the doer of deeds could have done them better. The credit belongs to the man who is actually in the arena, whose face is marred by dust and sweat and blood; who strives valiantly; who errs, who comes short again and again, because there is no effort without error and shortcoming; but who does actually strive to do the deeds; who knows great enthusiasms, the great devotions; who spends himself in a worthy cause; who at the best knows in the end the triumph of high achievement, and who at the worst, if he fails, at least fails while daring greatly, so that his place shall never be with those cold and timid souls who neither know victory nor defeat.”

Thank you for this, Butch Pierson. There is no better man I would rather coach with. To our athletes: You were all sensational and we will ride with you into any battle. However, right now, rest. Enjoy the holidays and your families. We will stand back on that mountain top again soon enough.

*Rest 1 min. between all sections.