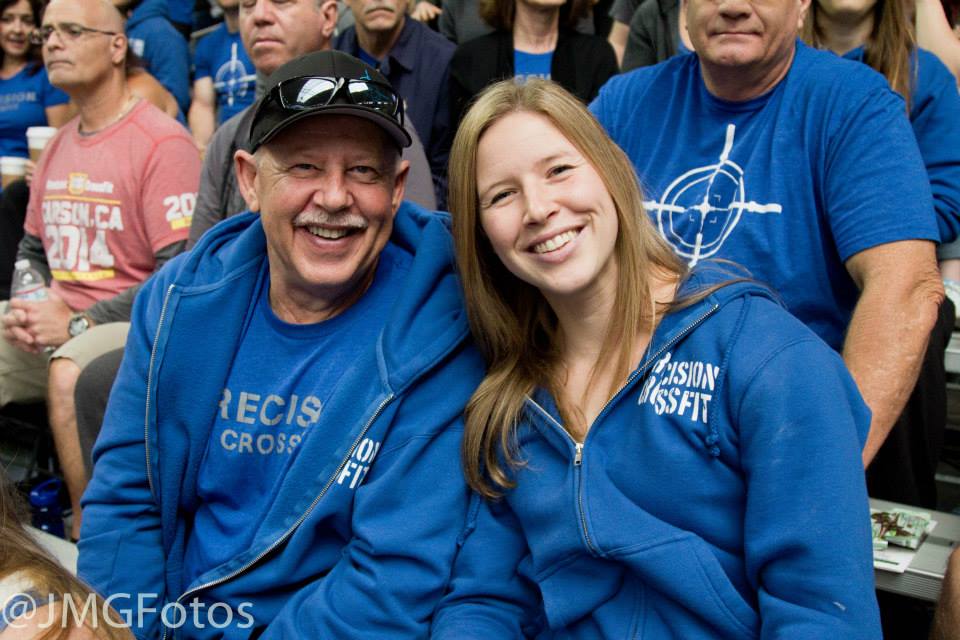 I have begun to post this blog once a year. Every year after Regionals I receive a lot of inquiries as to what Precision does differently than other gyms. Why have we found success? Why do we have so many great athletes? Why are so many great people drawn to Precision? And the most popular, do we have a “Competition Team”?

Our community is everything. We strive to keep it drama-free and tight-nit, but we have no problem accepting others. We do not separate athletes in our gym; everyone is entitled to the same benefits as the person next to him. When you see us at Regionals or any event for that matter, we are the “Wall of Blue.” Although I believe there is a place for “competition teams” as they are all well and good, and I totally understand what they are trying to accomplish, I am not a big fan of them. I do believe in the old saying, “Don’t knock it until you have tried it,” so just to be frank, know that I have tried it in the past. I have witnessed a CrossFit run with and without a “competition team” and have come to the conclusion that I don’t like the idea for a variety of reasons.

For one, I think it is dangerous to label people. Even though we use the whole “check your ego at the door” stigma within a CrossFit, let’s face it, people have egos. In labeling a CrossFitter as a competitor or not, and having tryouts for your “competition team,” you are labeling an athlete as being good or not good enough. You can still compete in CrossFit without being on a “competition team.” Every box owner can agree that CrossFit is 100% about community; however, when you label a “competition team,” you are in essence dividing that community. Whether you want to or not, you are establishing clicks within your gym. Although you may try with all your might to make sure this does not happen, it will happen regardless. It is human nature. Having your competitors workout at different times in their own “competition”-based classes, or having competitors in one part of your gym while your general fitness athletes are on the other can be toxic. There now is a loss of camaraderie within your gym, and although you try hard to keep it, it will still slowly shift away. A lot of reasoning behind the “competition team” is that a coach feels his competitors should be doing more advanced wods, skills, and lifts compared to everyone else. My argument to this concept is: isn’t CrossFit supposed to be universally scalable? So if you program a wod for your advanced athletes, shouldn’t it be scalable down to your lowest level athlete? We at Precision love competition, so much so in fact that we want every one of our athletes to compete against one another, regardless of level, day in and day out. We even have an “epic battle” board and all. Heck, we do almost every competition out there and bring a crew to compete and cheer everyone on, but we do not have a “Competition Team.” Everyone in our box is considered an athlete. Let’s face it: you have to have some degree of athleticism in order to do CrossFit. We believe every member is a part of our “Team” and can compete whenever they wish. All we ask is that they let us know in advance for two reasons. One, so we can prepare them, and two, so we can be at the event to coach them when they do compete. We never have an athlete compete in a competition without a coach and we strongly believe in that!! For those that want to compete, yes, extra work is required. However, that can be done on your own time as competing within class against everyone, no matter the level, makes you better. Training together also helps create a stronger community. While one member may never want to compete, he still gets to wod day in and day out with that member who does compete. He gets to workout with that “elite” athlete and maybe even beat the “elite” athlete on occasion. They push each other, making them that much more involved in each other’s success. Maybe that day when Johnny pushed Sally to her limit, it possibly made all the difference in the competition she was training for. Together, each person has had some kind of involvement in every athlete’s success; they’ve sweated together, suffered together, been humbled together. Because of this, all my athletes want to cheer on their buddies while they compete because they feel as if they can take ownership of part of their success and that is what community is all about.

As a coach, I do separate programming for all my competitive athletes who want to put in the extra time to get better. In fact, I customize individual workout plans for each of them. However, one thing I will always tell you is I don’t care who you are…you can be a Regional-level athlete shooting for the Games, or a 62 year old retiree who just wants to get stronger. I will write something up for you to help you accomplish your goals, and I will stick with you until you reach them. We have 2 Masters Games athlete, 9 proven Regional Athletes and several soon to be Regional athletes, all with one thing in common: they wod with the main classes and they put in the extra volume on their own time. They push it to the limit everyday with their community; they stay after and hit their additional lifts, skills, or wod. I want everyone to compete with each other no matter the level. I want to prepare all our members compete at life or prepare for that 5K, triathlon, or indoor soccer season.

Right now, competing in CrossFit is all the rage, so gyms creating “Competition Teams” seem to make sense. However, sooner or later people are not going to want to compete anymore for one reason or another, or there will be fewer competitions…then all you will have is CrossFit, pure CrossFit, your box, your athletes, and your community. I choose to focus on my community as a whole, not in pieces.

**Rest 1 Min. between each row sequence.