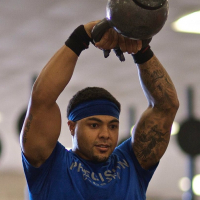 Hometown of Marysville, Washington Stewart was a 3 sport athlete at a young age, Football(quarterback),Basketball(starter 3 years),Track&Field(4 place state high jump, & Junior Olympics jumper). He fell in love with “the process” of becoming an athlete and his passion for becoming a professional athlete naturally gravitated him to the gym. he started Traditional style workouts in the gym and evolved to sports specific and athletic style Training (Speed and agility, power lifting, plyometric, and olympic lifting)

In 2005 Stewart attended Spokane falls College in Spokane, Washington to run Track and Field (Decathlon) on scholarship, and studied exercise science/anatomy/physiology and nutrition, in 2008 he became a Personal Trainer while pursuing a Professional Football career, from Arena Football, CFL, and NFL Camp/Tryout. By 2011 he Moved to Los Angeles, California and discovered CrossFit. He soon found Precision CrossFit in winter of 2013 and instantly became apart of the community.

“My whole life has been about bettering your self in every way possible, and I am passionate about helping the next person to reach there goals, I am a leader by example, i believe in hard work and dedication to mastering your craft, and teaching the next person how to reach there goals. being apart of the precision community is a pleasure because as I am constantly learning I’m constantly teaching”