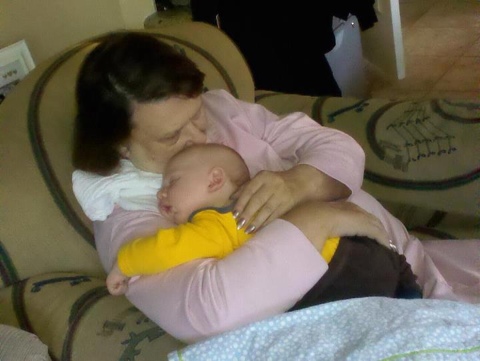 It was roughly one year ago today that I was told my grandmother had cancer. After battling the disease for a year strait and coming out cancer free twice, I found out yesterday that once again the cancer has come back. This will be my grandmothers third battle with cancer, and at 78 years old she is not sure what she has left. I don’t blame her. I mean, I cannot comprehend how hard it must be for her. My grandfather died of cancer, and I know she misses him dearly. I understand how easy it can be for her to want to quit, but I know she has it in her to fight. She has twice, why not another bout? It hurts my family knowing that she will be in pain once again. To be honest I think it hurts my bro and I more because we have had only known one Grandmother. Yeah that is correct, only one. We do not know our lives without her. She has always been a consistent force that we have always counted on for love and guidance. Other than our immediate family, my brother and I did not grow up in a very close nit family. Where many family’s hang out with cousins, Aunts, Uncles, and Grandparents. We never really got to know ours. You see, they live on the East Coast, and due to one thing or another mainly kept to themselves. My father’s mother died before I was born, and his father never really had anything to do with us until he was close to his own demise. The only grandparents my bro and I ever knew where our mom’s step father, our Poppie, and her mother, our Grammie. Poppie treated us like we were his own grandchildren, and loved us unconditionally. He taught me two very important things before he passed away. How to love your life partner with all the heart and soul you can muster, he loved our Grammie to death, and to never give up on a dream. I always remember him being optimistic and he gave me words of encouragement with what ever it was that I was pursuing. He would never let me show a shred of doubt in front of him and always believed in my talents. So much in fact that he once asked my college defensive coordinator during my sophomore year “why he was not playing his grandson?” Upon satisfaction with his discussion that my coach really had no apparent reason, he left him alone. Hahaha… he was not afraid to speak his mind. When he passed away my Grandmother was devastated and rightfully so. She had lost her best friend, companion in life. Now she is sick again. I know she is devastated. She has put up one hell of a fight.  But one thing I know, my Grandfather would make her fight. He fought heart disease for years before cancer finally claimed him and even then he never gave up. It can still see him in his hospital bed wanting to have a meal with his grandchildren even though he could not. I now this time it will be tougher for my grandmother but my she and my parents did not raise Daniel and I to be quitters. Even when our backs have been against the wall we have never quit at anything. So I ask my grandmother once again to fight. I know it will be hard but we will be here for her every step of the way. I made her promise to fight once again and she told me she would. She has gotten a chance to meet and spend a ton of time with her great grand children and I know she loves them dearly. I know she misses my grandfather but I think he would like her to stick around a little longer to experience what he could not.

You know sometimes it seems like doing a wod or hitting a PR is everything. We act like CrossFit is everything. We get angered by funny things like not hitting enough reps in a workout or not being able to do double unders. In reality that is not life. Fighting cancer is real life. We CrossFit to keep ourselves healthy. We CrossFit because we don’t like to quit. Just like my Grammie she is not a quitter and she is not ready to give up on life. Someday maybe one of us will have to battle against something as serious as this. Regardless of what it is. Just don’t ever quit! The rest will take care of itself. I got your back, once again, Grammie and I know I got an army behind me who has your back as well, whether you know who they are or not. Love you!