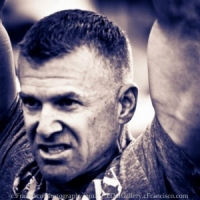 As a 26 year veteran Police Officer, Greg has learned the values of fitness and mental toughness. He has over 18 years on his agency’s SWAT Team and has been the Team Leader for the past 15 years. As the Tactical Team Leader, Greg is responsible for insuring that his team members are in peak physical condition at all times. His coach-like leadership style has been successful in leading his Team to victory in numerous SWAT competitions including taking 1st place in a SWAT competition that included over 40 SWAT teams from the western United States. Greg’s SWAT Team is one of the first in the country to incorporate CrossFit into SWAT qualification standards

Sports and fitness has always been a part of Greg’s life. He grew up playing team sports, including football, baseball and ice hockey. He has run several marathons, numerous triathlons and has completed an Ironman Triathlon in less than 12 hours. Greg has always been in “good shape,” at least he thought, until he started CrossFit. At 44 years old he is in the best shape of his life and he is committed to using his plethora of knowledge and experience to help others reach their goals.

I have been teaching and coaching a 30 member SWAT Team for more than 15 years. I know that people are motivated in different ways. I believe that many people, who are overweight or out of shape, have the drive and motivation but have been inhibited by poor training and bad nutritional information. My goal is to help those people, both young and old, achieve their potential and realize how enjoyable a healthy lifestyle can be.