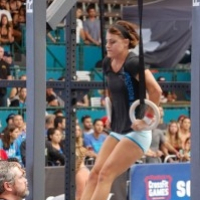 Unlike many crossfitters, Jessica began her athletic career when she began crossfit in the spring of 2011, and like many crossfitters she thrived on the competition. Suddenly immersed in the world of competitive fitness, Jessica steadily developed as an athlete, strengthening her mind and body. Her dedication landed her on Precision’s Regional team in both 2012 and 2013. Her love of Crossfit led her to obtain her Level One cert in the fall of 2012. She looks forward to a long, healthy career as a crossfit coach and competitor.

I believe that every athlete is multifaceted and every day is unpredictable, so defining success in crossfit will vary with the workout. Some days success will mean PR-ing, and other days it will be a triumph just to finish the wod. Regardless of what kind of day it is, my goal is to push you to succeed in it. I believe my role as a coach is not just to instruct and enforce proper technique, but also to encourage and inspire the community between crossfitters. Because harnessing the power of community to achieve your fitness goals is what crossfit is all about.