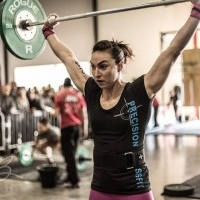 Katie began her athletic career in the sport of Equestrian Show jumping. In her sophomore year she switched gears and became a multi-sport athlete and began competing in cross-country, track and field and basketball. Upon graduating in 2005 from La Reina High School, she earned a spot on the California State University, Long Beach Division I Track and Field team as a pole-vaulter. At CSULB, Katie earned a qualifying spot for the conference roster all four years, and her name is at the top of indoor and outdoor all time school record lists. She graduated in 2009 and hung up her vaulting spikes ending her pole vault career. In the fall of 2010, she found Crossfit and fell in love with it. She coaches everyday while earning her Masters Degree and competes in CrossFit to keep here competitive spirit up representing in the reebox CrossFit Games So-Cal Regionals each year.

In my career as an athlete, I have found that there are three things that can help attain your personal goals: hard work, passion, and plenty of support. I would say I was a late developer. Because of this, I was often the last one on the practice field, in the lifting room, or in the training room. I was putting in the extra time where I needed to put it to help myself reach the goals I had set. At a young age I learned that hard work is the backbone of any performance worth having. I also learned passion and heart can make things you once thought unattainable, a reality. The last thing that I have always thought affects success if having the support to get you there. My coaches, teammates, family and friends were always pushing me to be better, helping me up when I was down, and drove me to be the best that I could be. This is what I strive to do as a coach, offer my clients the same support that I have experienced as an athlete to help them reach goals of any size, share my passion to help them find joy in their workouts, and instill that a little bit of hard work goes a long way.