It was a well needed break heading up CrossFit Ventura this past Saturday to coach four of our masters team’s at the St. Valentine’s Day Massacre. The last two weekends had been mentally draining, yet tons of fun with the “WODSTOCK” and “WINTER SHAKEDOWN” events happening on back to back weekends. It really was a breath of fresh air to only worry about coaching, and have someone else running an event. This event was particularly special because we only had master’s teams competing. Not a single one of our younger athletes took part, which was awesome, making it all about our seriously bad ass older athletes. Of the four tandem teams we had representing Precision one team chose to go advanced, throwing down with the younger crowd, in Deborah Haley and Greg Smiley. While the other three teams went all in representing proudly in the master’s division consisting of; Lynn Gay & Marty Yarnell, Lisa Pedicini & Pat Bader, and Juan & Angie Pena. All four team’s spent a considerable amount of time training together specifically for this competition. It was very cool to watch, as I had February 9th marked on my calendar for quite some time. I was so stoked to watch these fine individuals compete. They are always the one’s making the drive to the O.C. or Rancho Cucamonga, or where ever else to support all of us, and damn straight I was going to go and support them. You know what the cool thing was? Many other members of our Precision community made the trip as well screaming their hearts out for these beloved athletes. They all did very well and not only represented themselves but the whole PC community with great displays of effort, capacity, and strength. 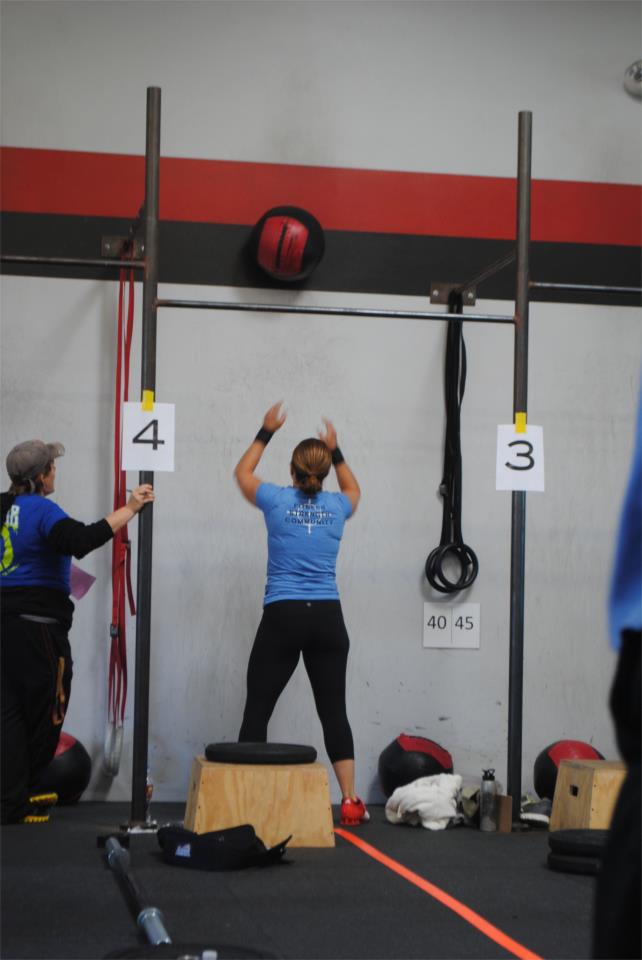 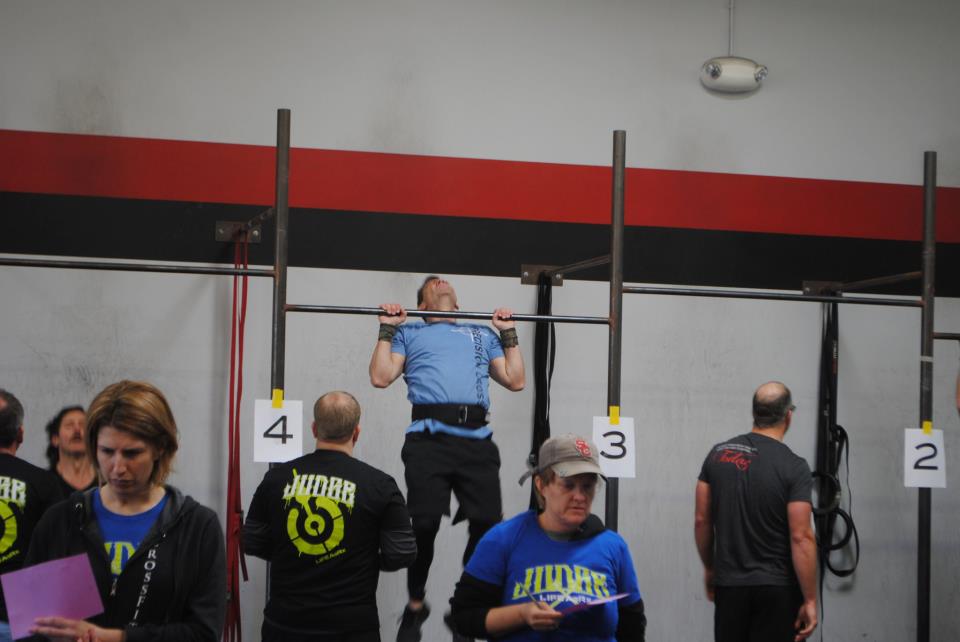 Our gym husband and wife Marty and Lynn have been CrossFitting together in the same classes for over four years now. Both are extremely competitive when it comes to competition, and they love to have a good time. Always one’s to dish out the funny and inappropriate comments at the perfect moments, these two made quite the team. Pushing it to their limits during WOD #1, which consisted of a max effort row and box jump combo, they found themselves battling for a podium position going into wod #2. They remained extremely competitive during a grueling second workout that required the equal work of both competitors to get the job done. This format consisted of a vicious chipper with movements such as; wall ball, pull ups, power cleans, db thrusters, burbee’s and kb swings, made it extremely hard on the male competitor. Marty tried desperately to keep up with the motor of Lynn Gay who would not stop for anything having to go in reverse order, a feat much simpler for her. However, one could not move on this workout until the other athlete was done, which left Lynn standing around for more than she would have liked. Marty gave it everything he had ripping out several KB Swings in the end before time was called. In a workout where they needed to finish in the top 3 to podium they found themselves finishing 6th just 10 reps shy of completion. They seriously gave it their all throughout the day holding absolutely nothing back. The competition was stiff and most likely if the weight was heavier with more gymnastics being included in the masters workouts, they probably would have fared much higher. They finished 5th place overall but in all reality, who really cares about how they finished? All we really care about is their competitive spirit, and amazing drives to want to succeed. We love you two, and are so proud of the amount ass that you kicked! 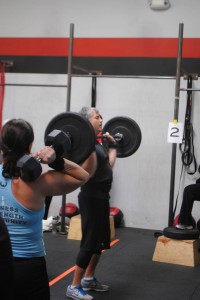 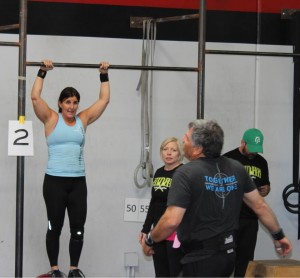 Two other long time CrossFitters, Lisa and Pat are both two very hard working individuals who just like Lynn and Marty breathe life into Precision CrossFit. They too left it all on the table Saturday crawling their way through each workout. Wod #1 was good for all our teams as rowing and box jumps really was nothing for them. These athletes are used to doing box jumps at height’s usually around 24 inches but sometimes even higher than this. With this WOD calling for 20/16, it really became a walk in the park for them. The great equalizer for everyone was WOD #2. Just like Lynn, Lisa too has a tremendous motor as she blasted through her portion of the workout only having to stop to wait for Pat. However, in defense of Pat the judging was quite atrocious with Pat getting no repped for the very same movements getting counted as good reps in the station next to him. Even with the inconsistent judging Pat never quit, he never wined, and never complained. He just kept working until time ran out. He put everything he had out there and that is all you could ask for. This team was fun to watch, and I know we could all learn from them. They stayed cool through frustration, something many of us still have yet to learn, or have not quite been able to master yet. These two did it with flying colors even when Lisa’s chain broke during her 1RM weighted dip she did not fluster, but found a way to make it work. These two people are amazing and we are super proud of them. Here is an awesome 6th place finish! Way to represent you two! 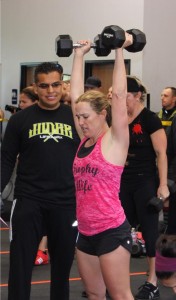 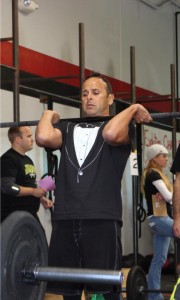 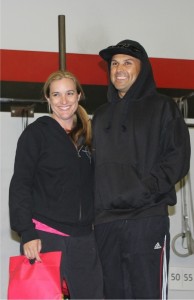 This was Angie’s first competition, and who better to do it with than her amazing hubby in Juan. There is never a dull moment when ever Juan is around, and it was super cool to watch this power couple throw down. You could tell right away what a tremendous team they are, as they worked together seamlessly. I mean for Pete’s sake they have five children together, they have to be one heck of a team, right? They communicated effortlessly and showed support for one another always remembering to smile, and stay positive. WOD #1 was a breeze for them even though Angie was a nervous wreck, haha. Once they said 3-2-1 GO! Angie went to work leaving all the jitters behind. They were the 3rd team to finish WOD #2, which put them in 3rd place overall going into the floater. Although, WOD #2 was hard they never showed any quite battling to the completion of the workout a feat not many others throughout the day could conquer. Holding on to 3rd place by a hair they took on the floater WOD. Angie needed more than 15 lbs. on her max dip with Juan needing more than 90lbs. They both did what they needed to do then battled through the exhausting 10 M. sprints. They needed close to 45 reps to maintain their podium positioning accomplishing this goal with 43.5 reps solidifying them in 3rd place overall. Juan’s second competition, and Angie’s first equaled to one epic podium finish claiming the title 3rd fittest masters couple at the 2013 St. Valentine’s Day Massacre! 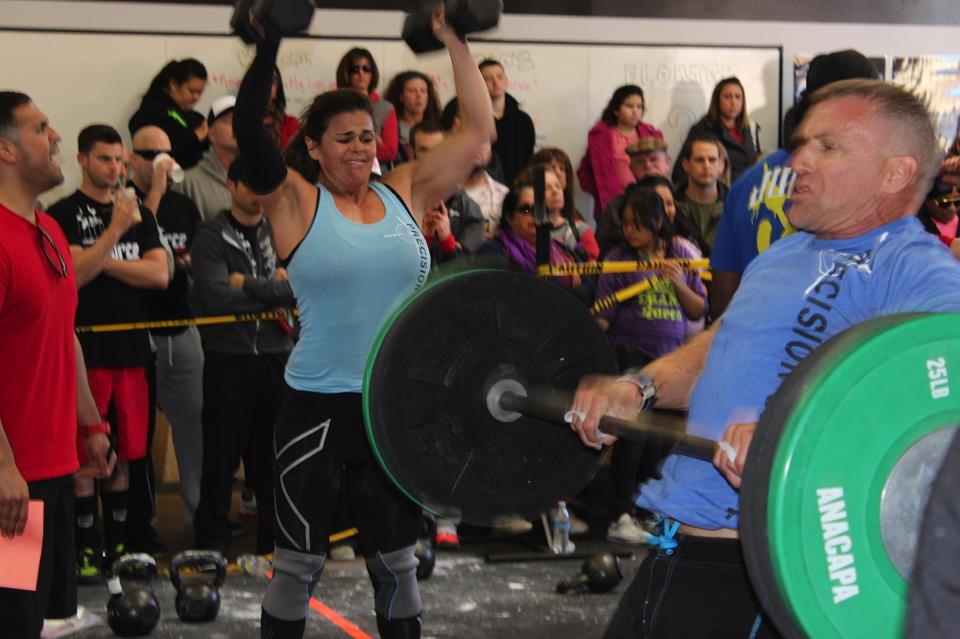 Going into this competition Haley was afraid to have to keep up with the beast that is Greg Smiley. Turns out it was the other way around with Greg, at times, trying desperately hard to keep up with Haley. Both worked beautifully together during WOD #1 efficiently moving back and forth from rower to box jumps. In the floater both put up big weights in their max ring dips before powering through the 10 M. sprints. In WOD #2 Haley turned on the after burners torching through her portion of the workout with Greg trying frantically to hold the pace Haley set for them to keep. There was no stop in Haley as Greg got to his power cleans where, as his coach, I witnessed Greg breakdown mentally for the first time in competition. A man who never takes long breaks his rest time became longer and longer. However, being the competitor that he is, Greg woke up and battled through the workout catching up to Haley’s blistering pace during his burpee’s allowing them to come from behind finishing the workout first in their heat. Oh yeah, did a mention that they chose to do the advanced division because the masters workouts were too easy for them? They finished first in both of their heats showing everyone in attendance why they might both be in Carson, CA this summer representing Precision CrossFit in the Master’s Division at the CrossFit Games. These two are absolute beast’s finishing 4th place overall in a competition stacked with athletes half their age. Not only did they finish 4th but they were only .4, that’s right, .4 points away from finishing 3rd overall and claiming a podium spot. Out of 50 teams these two 40 plus year olds were better than 46 teams, incredible! Haley was incredible as always, and Greg and I are proud to have Haley representing Precision CrossFit. They made one hell of a team together. 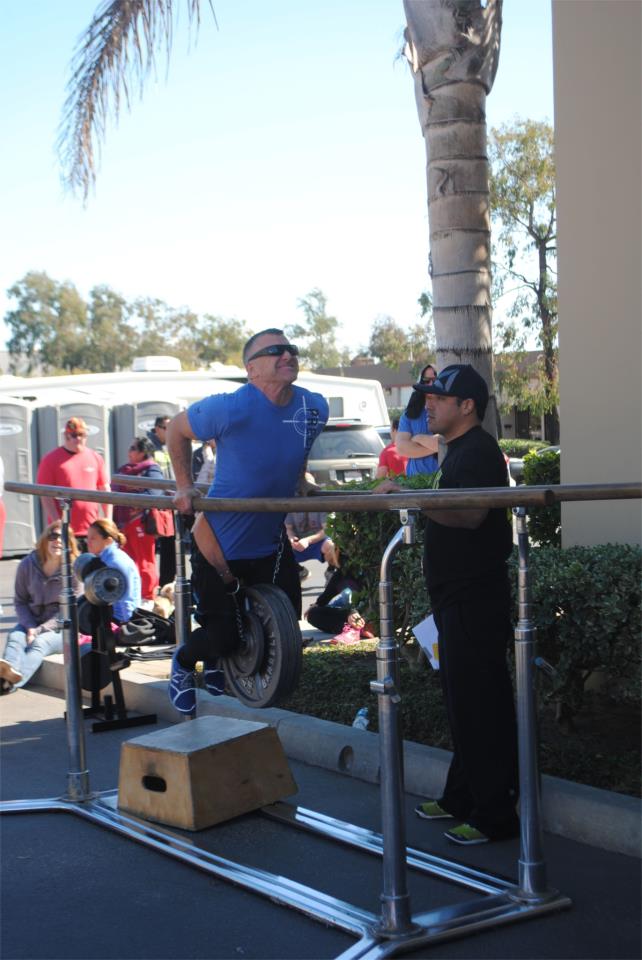 In conclusion, the St. Valentine’s Day Massacre was not the best competition as far as the judging was concerned. It may not have been 100% on time all day. Yeah, the wod’s could have been better, and the scaling could have been done a little bit more aggressively. But that is not what Saturday was about. Saturday was about Precision CrossFit celebrating our 8 master’s athletes who chose to throw down. It was about fun, and it was about spending a day in honor of their hard work. We got to honor some of the great people that make our Precision community so special, and damn was it a good time!

*Work up to a sprint.

*Work on Positioning and have fun! 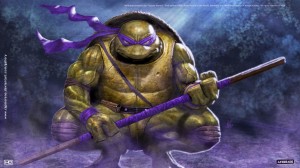 *Sub. for HSPU will be H.R. or elevated Parrallet Push Up’s only. Sub. for C2B Pull Ups will be Regular Pull Up’s only.