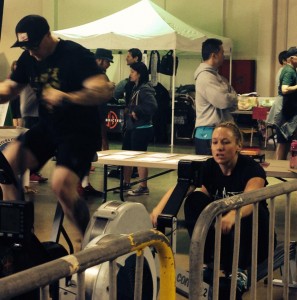 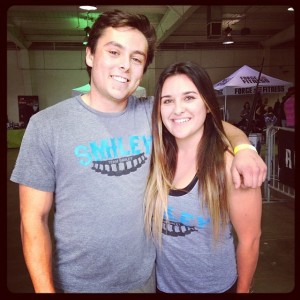 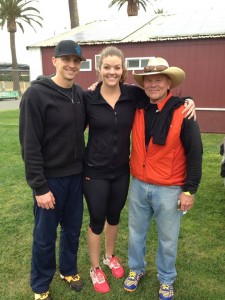 Last weekend over 120 teams headed out to the Ventura County Fair Grounds to take part in the 2014 Valentine’s Day Massacre. Of these teams Precision CrossFit was represented by 7 duo’s, one in the masters division, four in the intermediate division, and two in the advanced division. These teams all represented P.C. proudly and sported that Precision blue with pride.

Our Masters team “Love/Hate Burpee,” consisting of Braden Daniels and Jenny Chen-Edwards put forth everything they had to take 6th place. They were very impressive in each wod leaving it all out there every time they took the floor and showed some of the young ones how to get it done! Although, they made of been disappointed in how they finished they battled some seriously tough wod’s and kept their cool even through times of adversity. This is what true champions do and these two are champions in every sense of the word.

Our 4 intermediate teams consisted of Greg & Liz Schimpff “The Schimpffords,” the newly engaged Greg Marx & Katie Nenneker as team “Twelve-Foot-Three,” Sean Frasier & Julie Frasier  as team “U.S. Americans,” and Chris Berman & Cami Pena as team “Your Mom.” All 4 teams held their own in a stacked intermediate division consisting of 68 teams. “The Schimpffords” had the best finish taking 9th overall while the other 3 teams finished 13th, 26th and 38th. Some very gutsy performances from everyone involved as this was Katie Nenneker, Sean Frasier and Chris Berman’s first ever official competition. They all seriously threw down and looked extremely prepared taking on some seriously tough workouts! The Schimpffs, Greg, Cami and Julie looked like seasoned vets out there as they handled each workout with ease and confidence. Each person was integral to their teams success having tons of experience to bring to their partnerships. As a coach I was very proud of everyone but really enjoyed watching Chris and Cami compete. They were arguably the youngest out there but gave it everything in each workout. Big shout out to them and bravo. Greg Marx looked like an advanced competitor competing against intermediates and that is because he was literally! I felt the same way when watching the Schimpff’s compete, Liz was extraordinary. All our athletes have gotten so much better and it was obvious as to how prepared they were. The Frasier’s were awesome to watch as Sean went beast mode for his wife who never has any trouble finding her own spark! It was a fantastic time all around.

In the Advanced division you had me and Kristin as Team “Inigo Montoya’s Revenge” and Katie and Daniel as Team “The Crowemello’s.” We battled it out against each other all day in a large field of 49 teams to take 1st and 2nd place bringing another banner to Precision CrossFit’s walls. Daniel and Katie proved as always to be hard to catch but Kristin and I sure gave it our all. So much in fact, that it seemed like we were the only two teams out there during the final workout of the day. We literally jockeyed for position in a full on Precision CrossFit battle royale. It was obvious that we all train together which made the environment and the crowd that much more fun. Kristin was super impressive all day getting on her first podium which was extremely well deserved. She pushed herself to another level and that is why we were successful as a whole. I can’t wait to see what the future has in store for her. We all had a blast and were honored to represent for P.C.!