Fun re-caps by two of our favorite people, Lynn Gay and Greg Smiley!

Yeah, I know, you’re asking, “Wasn’t Silver Fox over a month ago? Why don’t Greg and Lynn let it go?” Well, it really all comes down to both of us being procrastinators – Big Ones. Greg decided to do all of his pre Silver Fox training with Mickey and Minnie on a cruise ship and then some more on the beaches in Miami. The plan worked out pretty well for him. Once he got back from vacation and back to the gym he had one week until competition day. Here’s how the big day went down: We pulled out of my driveway at 5:45 a.m. and it was a warm 40 degrees with rain predicted to fall all day. It was one of those perfect days where you want to stay in bed and watch movies all day (not together – that would be weird), but we were on our way to see how we stacked up to the other AARP members of CrossFit. The first WOD was Climbing the Decades  – 10,20,30,40,50,60: HSPU, T2B, Burpees, Box Jump, KB Swings and C2B pull-ups with a rope climb at the end. Time cap was 13 minutes.  Greg took 7th in this WOD and he was up against some tough competition in a field of 40-49 year olds. Greg was one of the first off of HSPUs and kept a good pace all the way through the workout. We’ve all seen Greg’s motor and it was the same for this workout. The second WOD was a ladder of Snatch for 3 points, C&J for 2 points or a clean for 1 point. Greg was able to get to a 235 pound Clean and Jerk and then moved on to dead lifts at 245 pounds to pick up some extra points. Greg took 6th in this ladder. It was great to see how far technique can get you, and watching Greg was a great example of this. His body weight compared to a lot of his competition was not fair … but there is no such thing as fair in CrossFit, right? Greg kicked ass and made it all look easy. The last WOD of the day was the Birthday WOD. It consisted of Cleans, Hand Release P/U’s, Wall Balls (3 rounds) and ended it with the most miserable row of 500 meters. Greg took 7th in this WOD. Greg ended up 6th overall for the day. In a field of 20 guys and a wide age range of 40-49, Greg did awesome and proved once again that he is a force to be reckoned with. After all of the WODS were over, the clouds parted and the rain stopped. You couldn’t have asked for worse conditions and a better day all at the same time. Greg had a great day and performed like he always does, giving 110% and fighting for every second, rep or pound. I know that he is someone we all look up to … even if he isn’t as tall as most. J He is small but mighty, and today and every day he is an example of what hard work is and how it can pay off. I just want to say on a personal note that Greg gave me one of the greatest gifts that day – an experience. He pushed me to do this competition and was relentless about it. I never played any sports as a kid and that means I was never part of any team. I never won a trophy, a certificate – nothin’.  I went home that day with my first win – ever. It was the first time I stood on a podium. The greatest part was as we got to the end of the day we knew I had placed in top three but not where. They called the 2nd place girl’s name, which meant I had taken first. As soon as they called her name Greg and I looked at each other and we both had huge smiles on our faces.  I think he was as happy, if not happier, than I was. That is a true friend. I feel very lucky to have Greg in my life as I know a lot of you do. 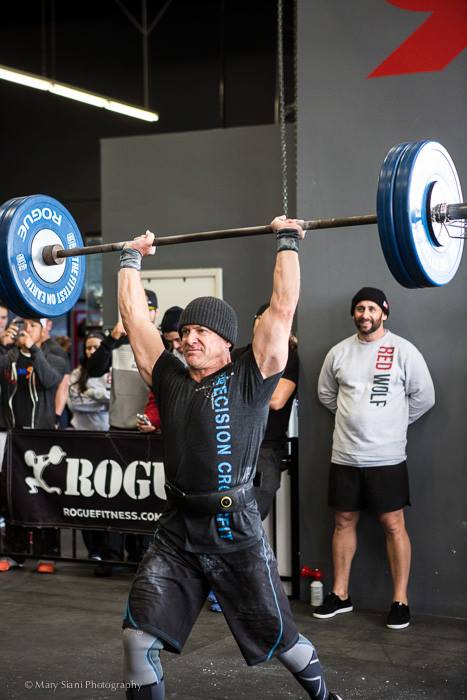 On Dec 7th Lynn Gay competed in the SilverFox Competition. This was the first of many all Masters Competitions. Lynn competed in the 40 – 49 year old age bracket. So we don’t reveal her actual age, let’s just say she was old for her age group. Lynn started things off in WOD 1 with a blistering pace completing  10 handstand pushups and 20 Toes to Bar unbroken to take a commanding lead over everyone. The two ladies next to her were both 40 years old (much younger than Lynn) and they were not quitting. Lynn maintained her lead until the 50 Kettle Bell swings. About mid-way through the 50 swings Lynn “died” (her words). She managed to get through the remainder of the swings and made up some time on the 60 pull ups to finish 3rd in her heat. Next came the Olympic lifting ladder. The ladder was scored as follows: 3 points for a Snatch, 2 points for a Clean and Jerk and 1 point for a Clean. Lynn Snatched her way from #65 all the way to #85 where she looked at Smiley and asked if she should go for a #95 PR Snatch. Well of course Smiley said go for it and she did it with ease, #95 Snatch PR. She moved on and ended up with a # 135 Clean and Jerk and a #145 Clean to take second overall. She was sitting in 1st place going in to the final WOD. The final WOD consisted of 3 rounds of 10 Cleans, 15 Hand Release Push Ups, 20 Wall Balls and then a 500 meter row. She once again “died” during her favorite movement, Wall balls but made up time on the cleans and Hand Release Pushups (well sort of, numerous  “no-Reps”). Lynn ended up blowing away all but one competitor and showed all the young 40 year olds how it was done. When it was all said and done she took 1st place overall.

Great Job Lynn, we are all so proud of you! 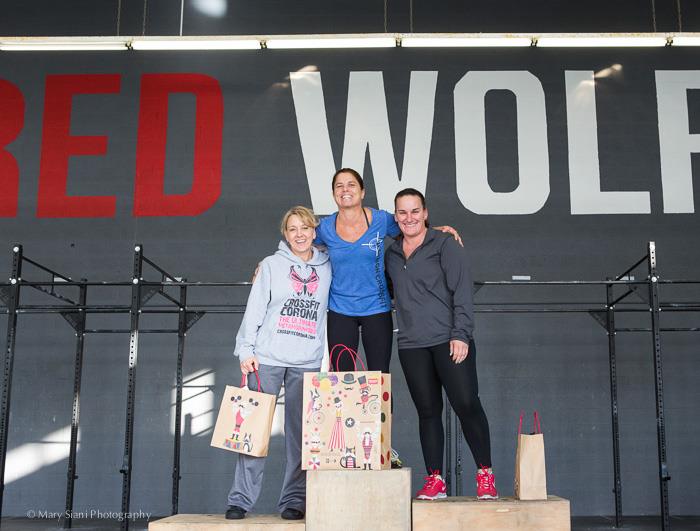 *You must add weight!

1 Min. Max Effort at Each Station w/ 1 Min. Rest after each full round.

In this workout you move from each of five stations after a minute. The clock does not reset or stop between exercises. This is a five-minute round from which a one-minute break is allowed before repeating. On call of “rotate”, the athletes must move to next station immediately for best score. One point is given for each rep, except on the rower where each calorie is one point.