BattleFit West was a pretty epic disaster. The only good news to come from the whole situation was our own Greg Smiley took first place in the Master’s Men Division. No matter how horrible the comp was we are always darn proud of him! 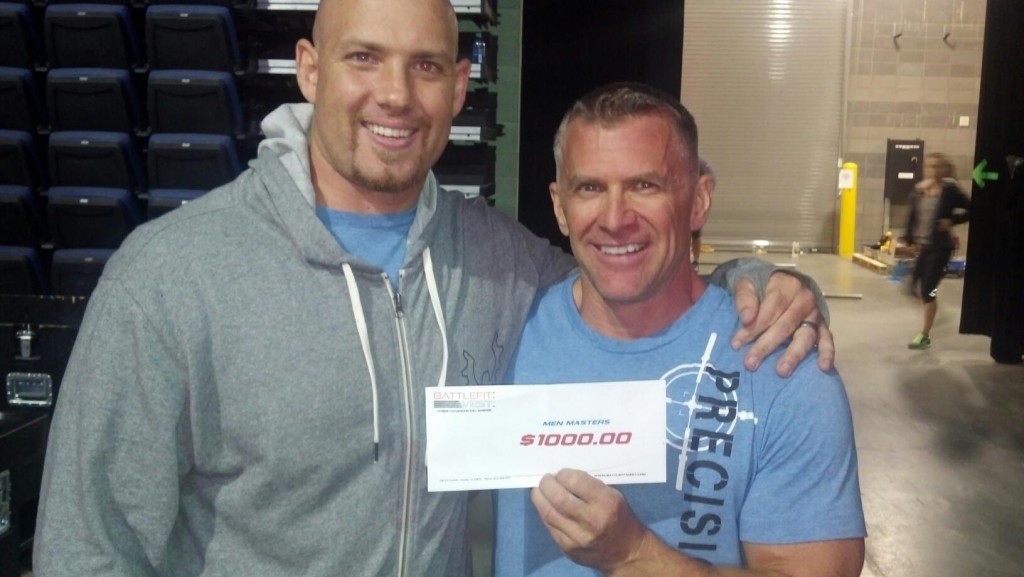 Daniel did a great job of re-capping the event. It was truly a horrible experience and he tells it like it is. Read at your own risk, hahaha. Enjoy!

The debauchery that ensued yesterday was beyond anything I can ever explain. But that’s not going to stop me of airing my grievances. Hats off to the volunteers and judges who just wanted to be apart of what they thought was going to be a f un event. This is not about you. Strictly the people in charge. If you don’t like what I have to say… I don’t care. And BTW, anything that I say positive about the event besides hanging out with my crossfit buddies and shooting it with the community is complete sarcasm.

1. The weight class idea, although kinda cool in a stupid way…. was… nescient. Let’s get real, this isn’t cage fighting, boxing, UFC, or any other kind of sport where verses and weight classes are needed. This is crossfit. I sport that crossfitters cherish for the purity of what it is. Besides what did the verses idea matter if everyone was thrown out there at the same time anyway?

2. Warm up area? It didn’t exist until my brother, myself and 30 other angry crossfitters said something. When we got there… they had four rowers. So adequate for the “hardcore” battlefit workouts we had to prepare for. Then they blamed functional for not bringing them enough equipment? Let’s put it this way, everyone makes small mistakes.. BUT… We have run many competitions and never has functional ever shorted us to only 4 rowers for warm up. Obviously Battlepoop made that massive mistake. When I asked them why.. they blamed functional.
One of the workouts included a bar muscle up.. but everyone knows you warm up for a movement like that with rowing and a pvc pipe. Thank god they never got to the max lift, heavy dead lifts, heavy power clean, and overhead squat they had planned. And btw.. they only had roughly 250 lbs of weight.
3. Having 6 wods each with a 30 minute intermission? If this sounds like it doesn’t make any sense.. it is because it doesn’t. Here is the kicker, because Battlefit decided to open up more spots due to “popular demand” aka.. (Our INVESTOR is pissed we’re going broke and wants to at least break even, so let’s let everyone compete for 85 bucks). They had 32 different divisions, 3 weight classes, 3 levels, and countless amount of incompetence running the “show”. Most people only got to do one workout and the funny things is, that wasn’t because they were knocked out it’s because they didn’t start until after 5:00. 16 competitors who paid full price never walked out onto the ice-cold floor. This whole “Unknown and Unknowable” idea is pathetic and has got to stop. It’s so dumb I can’t wrap my head around it. They used the intermission time to go over workouts that they didn’t even know. And the standard is..ummm..ummm…”We have no clue” . So you’re telling me that a 30 minute intermission in between 6 workouts with 32 divisions was going to run on time and not end next year? We all know the answer to that question. Oh and by the way..in case you missed it.. they scratched 2 workouts and still ran 6 hours late.

4. Standards? Here is where its gets fun if it wasn’t’ already. So you’re telling me that the dude in charge of the standards didn’t know the standards? He had to read off a sheet that he couldn’t actually read? He couldn’t answer basic questions about weight and what a squat clean thruster is? He couldn’t tell you how many reps were involved in each workout? He didn’t know what the time cap really was? It’s true folks.. that happened. Needless to say the judges weren’t briefed in the morning and instead had to wheel out the weight because they didn’t have enough volunteers to help this train wreck. Not to mentioned women of all weight classes and levels had the same weight and nearly the same weighted stupid jump rope. I could go on and on and I’m sure everyone has a story for this one, I’ll let them tell it.

5. WODS? (In stupid grunt voice) “We have over $15,000 of prize money to give out the most hardcore, awesome, battlepoop champion testing the fittest of the fittest in all areas. We even test your mental will to withstand a freezing cold ice rink at 9 pm. But here is the kicker.. WE ONLY TEST IN 5-10 MINUTE DOMAINS WITH MODERATE WEIGHT AND STUPID WODS” From the qualifying workouts that were all posterior based: Heavy dead lifts to sumo dead high pulls to power snatch. Thanks battlefit.. my hamstrings got stronger over the past month. The workouts in the competition were nearly as silly and since they were behind so bad put them at a 5 minutes cap. hmmmm So you’re telling me that you’re giving out that much money for 10 minutes of actual work? The men’s advanced final was thought out literally on the spot as we walked onto the floor. If I didn’t see it myself, I wouldn’t have believed it. And rumor has is it a massive judging error may have impacted the overall winner of the advanced females.

6.Time? This is too easy.. but damn I have to say something 🙂 I’ll put it this way. MY ONE YEAR OLD NEPHEW COULD KEEP A RUNNING CLOCK AND CYCLE PEOPLE IN AND OUT FASTER.There was no time structure on any workout. They even cut one of the workouts two minutes shorter and still had “Tie breakers” right after each heat which took another few minutes to finish. Leaving the workout as is would have prevented most tie breakers. And the final wod: already being 6 hours behind heat schedule, 3 hours behind the time they had to leave the building still didn’t have a cut off. It was a stand around game until the last person finished. Oh and by the way..every 15 minutes after 7:00pm allegedly cost them $3,000 to use the facility. You do the math.

7. Aesthetics vs. What’s important: The venue, the ecstasy lights, the live stream ( Which if someone was watching had to feel like a dad filming his kid’s soccer game and left the camera on for three hours filming grass), the banners..Let’s just say all the stuff that does not matter. I’m sick of it. The Crossfit games doesn’t do it. It’s not about that crap.. It’s about the structure, judging, standards, being on time, the community, following a schedule, fun challenging CROSSFIT workouts.. IT IS ABOUT EVERYTHING ELSE. The sooner you get that through your heads, the better. And this is not just Battlefit to blame. We all like a nice venue, there is nothing wrong with that. But come on man. Don’t bite off more than you can chew with useless material crap.

8. Who’s Running the event? Oh yeah, you better believe I am calling you out. Let’s play the game never will I ever.. Hmm the same guy who was/is in charge of the NLI lateness and problems. Here is the thing. Great person, means well, wants to do a good job, caring personality. Bottom line is: myself, our gym, and anyone else who I can stop will never do another event of yours again.

3×5 Ball Up into Extension