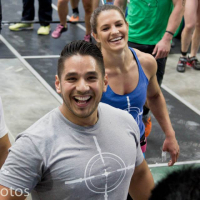 Jose started CrossFit in late 2011 when he was looking for a new fitness challenge and immediately fell in love with it. Growing up he was always active in recreational sports such as soccer but knew CrossFit was different. He was instantly drawn to the daily competition and strong community atmosphere and crossFit became more than a fitness challenge, but a lifestyle. His hard work, dedication and drive to be the best athlete he could be earned him a spot and chance to represent Team Precision at regional’s in 2014 and 2015. Since starting at Precision CrossFit in 2013, Jose has made a big impact on the community as the head coach and general manager. His passion for helping others and watching them succeed does not go unnoticed and has driven him to be successful not only as a coach but also as an athlete.

“Coaching isn’t about telling people what to do or where to go but guiding them and helping them achieve their own goals. It is taking pleasure in watching someone achieve something that they never thought they could. It is pushing someone harder than they think possible. It is witnessing accomplishment, joy, excitement, frustration, fear and success at all levels. It is knowing that no matter what the challenge, adversity will always win. It is a lifestyle, a passion, and a pleasure. Coaching is something that I wake up excited to do everyday.”