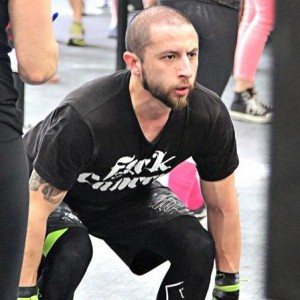 My name is Jose Gutierrez. I have been doing CrossFit for more than 2 years, and was considered a metcon-master. In June of 2012, I was diagnosed with testicular cancer that required surgery and chemotherapy. That effectively shut down my CrossFit career for 4 months. Before the end of my chemo, I ran into my good friend and co-worker Mike Tromello at a CrossFit event. He asked where I had been hiding for the past few months, but I could tell he already knew the answer. It was physically obvious that I had cancer at this point as all my muscle, endurance and weight had vanished. My skin was yellow and I had no hair on my body. I went from weighing 145lbs to 133lbs. I sat down under Mike’s tent and had a long conversation with him. I was clear with what I wanted, explaining to him that I wanted him to make me stronger than I ever was when I returned to CrossFit. I was going to kick cancer’s ass and wanted him to know it. We spoke about my future goals with Mike not shedding a single doubt as far as what I was capable of. I told him my goal was to compete again and that I wanted him to help me get there. Mike said, “HELL YES!!” and a few months later upon a clean bill of health having conquered one of the biggest obstacles of my life, I contacted Mike ready to begin my quest. In October of 2012, he placed me on his strength program (I call it get Skrong), which I am still following today. My goal was to be able to compete in the Winter Shakedown, programmed by Mike himself, which was only 3 months away. For those of you unfamiliar with the Shakedown Team Series, it a grueling test of team fitness being arguably one of the best team competitions in the nation. You not only have to be a solid well rounded CrossFitter but also strong as the programing always tends to be heavy, aiming to test the elite. Mike without hesitation knew it was possible for me to get there. Not for a second did I doubt him. February 2, 2013 I competed in the Winter Shakedown, I was able to complete every single lift, and movement that was thrown at me. Thanks to Mike’s programming, I now weigh 157lbs, 12lbs more than I did pre-cancer, and I have PR’d on every single one of my lifts, all in less than 4 months. I would like to mention what an honor it is to have a friend and coach like Michael Tromello. I will never forget what he has done for me, thank you. YOU ARE THE F(*&#!* MAN!

This can also be found in our Testimonial Page