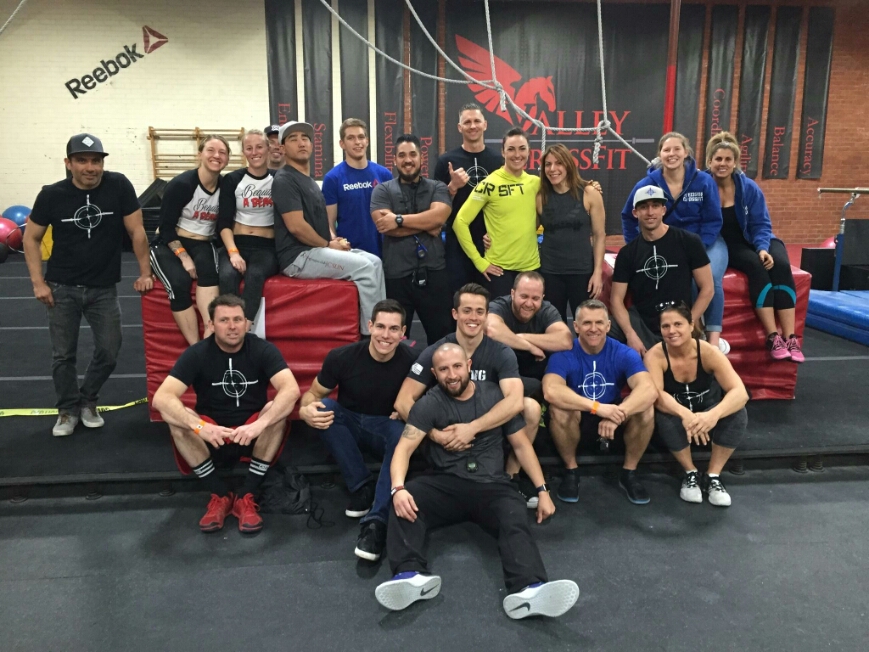 I have been delaying in writing this re-cap for a couple of reasons. First off, I do not think it was our best work as event runners. Second, the behavior of some of the athletes at this event left a bad taste in my mouth about CrossFit. Now, I am not talking about Precision CrossFit athletes here. As always the athletes that represented TEAM PRECISION handled themselves with class. You were all gracious in defeat and humble in victory–the definition of true champions. However, it became evident that a younger generation of CrossFit athletes have muddied the waters of the Shakedown with their false sense of entitlement.

Now, do not get me wrong; I own that this event could have been run better. The judges could have been briefed better, and because they were not, some questionable calls were made (nothing that determined the overall standings but things that questioned the consistency of the event). We were often rushed due to poor scheduling. Because of this communication was poor between event planner and judges. If more time had been allotted between transitions, more communication would have occurred. This would have allowed us to also re-brief athletes, especially those that missed the athlete briefing in the morning, which is a whole separate issue in itself. This being said, the resulting mistakes were trivial: athletes not always facing the correct way, bars not moving to the correct markers between rounds, athletes using a gymnastics kip for a Bar Muscle Up, etc. All small mistakes in the grand scheme, but things that are essential to running a high quality event. Clearly, there was room for improvement; I own that. However, no matter your frustration with an event, it does not gives an athlete the right to speak poorly to our judges or volunteers.

It is obvious that times have changed since the first Shakedown in 2011. We have a whole new generation of CrossFitters doing the Shakedown now. Every generation has its own identity, and what I saw of this particular younger generation at the Shakedown this year was disconcerting. For one, in any sport regardless of the call, it is by no means acceptable to argue with a ref or judge. If you do, most of the time, you will get carded or thrown out of the game. However, at the Shakedown it has become a norm. This was not always true, nor do I think it should be tolerated. Getting no-repped is part of competing in CrossFit. It makes you better, and back in the day when you got no-repped, you learned from it and made the necessary adjustments. Nowadays I watch athletes get no-repped and lose their minds. To me, it is an issue of self-entitlement. “I deserve the rep” is the stance taken by athletes now. However, getting a rep isn’t a matter of how much you feel you deserve it; it’s a matter of doing the work as prescribed. This applies to life as much as CrossFit, and the sooner we recognize that wanting something does not guarantee our receipt of it, the better off we’ll be. It is a simple test of character: getting no-repped does not define you as an athlete, but your reaction to a no-rep does. Anyway, all this to say that there was a lot of arguing and yelling at judges on Saturday, which displays a lack of true sportsmanship and lack of human decency. And before you tell me that the judge clearly made a “bad” call, let me remind you that the Shakedown is a community-run event. We use volunteers who take time out of their busy lives to enable you all to have a good time. They should never be spoken to poorly. They are doing their best, just as you are giving your best. I could go on and on. Truth is, I know all the competitors are great people, and I also know that competition can bring out the worst in us sometimes. Bottom line: I think we can all agree that both sides–the event coordination and the athlete behavior–could have done better.

Now that I have ranted about the things that didn’t go well, let’s talk about the things that were awesome. Our teams did exceptional in a very competitive Intermediate division. Out of 39 teams you all took 3rd, 6th, and 7th. That is spectacular. We had a total of 6 Masters athletes competing in this event, which is awesome. To do what you all did was exceptional! You all showed extreme intelligence when executing your game plans, which to me was the most impressive thing. This event was all about wod management. To take top 10 is a feat that goes well beyond athletic ability. Lynn, Alix, Smiley, Tom, Marx, Sean, Urbs, Lindsey, Allanah, Emily, Cory, and Big Mike, you work beautifully and elegantly through each workout. I watched Big Mike dig hard on that rower; Lynn hit huge hang cleans sets when Alix needed a break; Alanah & Emily went HAM on the competition to win by minutes in their portion of WOD #2. What a team you girls are. I am stoked to be bringing in yet another banner to be hung at the gym. Also, a special shout out to our very own Katie Tromello and her team for taking 2nd place overall in the RX division. This team consisted of Tromello-programming athletes Bill and James Grundler as well!

Three events in four weeks and we podiumed multiple athletes, which is quite the feat. With that comes a positive and a negative. The positive being all the praise for all your hard work, the awesome podium pics, and the great memories that come with glory. The negative being the haters, jealous of our accomplishments as a gym. Sometimes when you cannot compete, you chose to hate out of jealousy. Pay them no mind. At Precision we have tons of ability. We are well coached and we are persistent. Regardless of what is said, we remain diligent in our efforts and take the criticism as a compliment. Athletes, all our hard work has been noticed. Welcome to the spotlight! Well done.

*Work to a heavy singe from the floor.